This half-term, Maple's  topic was on ‘Coastal Locations’. Our focus was on looking at different human and physical features of the UK and comparing and contrasting to other countries in the world. The children used chalk and eight-points of a compass and gave directions looking at maps. We were lucky enough to have an orienteering session at Leeson House in the final week of last half-term which led us nicely into this topic area.

In English this half-term, the children explored features of leaflets and use of persuasive language. They wrote and illustrated some fantastic leaflets of their own, detailing the many wonderful things that Langton has to offer tourists.

In Science this half term, we have been learning about Living Things and Their Habitats. We focused on vertebrates and invertebrates and used classification keys to identify and sort the variety of living things. We walked to the nature trail and went on a hunt for different creatures to sort using these keys.

Maple class were lucky enough to take part in two themed days this half-term. The first was Outdoor Classroom Day which we linked with outdoor maths and art. The children thoroughly enjoy the Outdoor Classroom Day which is why we have made sure to timetable one in termly. The second exciting day was French Day. The children were lucky enough to sample a variety of cheese, French baguette and croissants. We enjoyed the lovely sunshine and played several games of Boules and learnt about the French Revolution. Finally the children made the Eiffel Tower using dried spaghetti and marshmallows.

This year has been truly wonderful and I’ve enjoyed every moment teaching Maple class. I can’t wait to see what adventures the new Maple class will have next year! Have a lovely break and see you all in September.

This half-term, Maple have started a topic on ‘Extreme Earth’. Our focus has been on earthquakes and volcanoes, where the children have learnt about the cause and effect of each event. The children made models on what is inside the earth and were fascinated to learn what was beneath their feet. In an imaginative activity, the children took a journey to the centre of the earth, where they went through different layers experiencing rocky rides and intense heat, which they had to wear protective clothes for. As a class, we created our own volcano using vinegar and bicarb and watched a real explosion happen before our very eyes. Linking in with our topic, we took a trip to Leeson House and discovers more about volcanoes and earthquakes and also took part in an orienteering activity which will lead us in to next half-term’s learning. 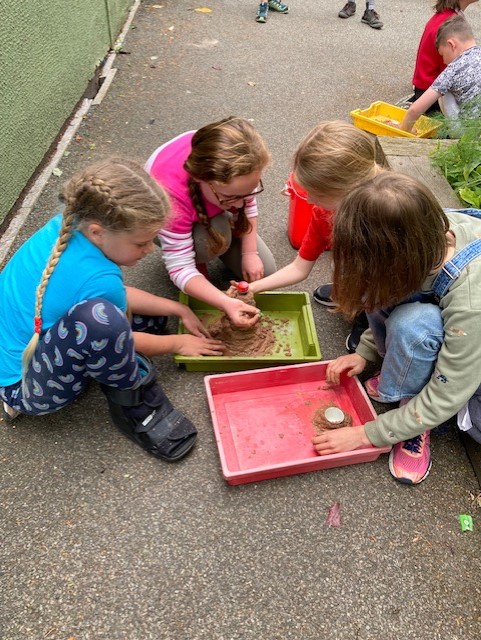 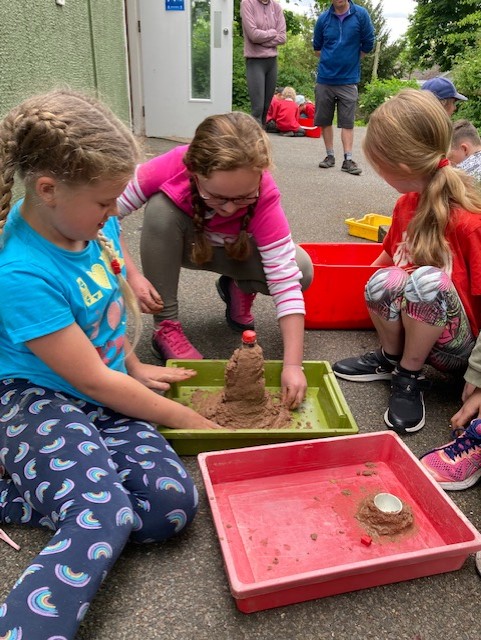 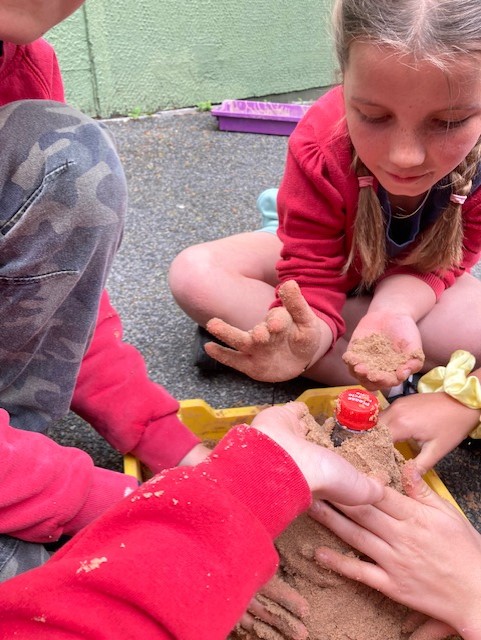 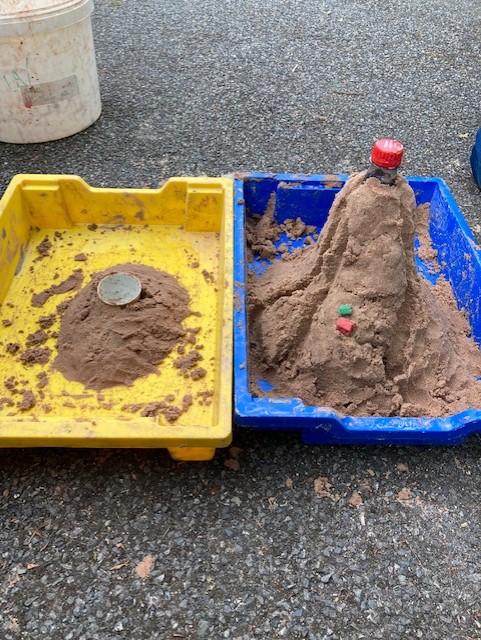 In Literacy this half-term, the children wrote an exciting play script about a group of researchers climbing an active volcano which begins to erupt! Prior to this, the children gained experience acting in a group using a pre-written play script which benefitted their knowledge and understanding when they came to write their own.

In Science this half term, we have been learning about Animals, including Humans. They were fascinated with the digestive system and enjoyed sorting animals into different categories. They also learnt the different names and functions of teeth and compared these to animals, explaining why they differ from humans.

Maple class were fortunate enough to watch Bournemouth Symphony Orchestra play at the Light-house Theatre in Poole. As part of our music lessons this term, the children were asked to learn a song with Makaton actions and body percussion. We then sang this with many other schools alongside the full orchestra. It really was a truly magical sound and experience. The children were amazed by the songs created by different composers and were inspired to play a variety of instruments.

Our key question in R.E. has allowed us to learn more about what happened after Jesus was crucified.  We read from Acts 2, in the Bible, to learn more about what is written about this time, then addressed the question of what Pentecost actually means for Christians today.  This led to some excellent reflections, with the children all becoming more confident with expressing themselves, using a higher level of religious literacy.  We were very pleased that Mrs Astle was able to witness the excellent learning taking place, when she visited one of our lessons.

In French, we have been looking at different methods of transport, learning about how we can travel to France from the U.K which has also helped our geographical awareness of the two countries .  We have learnt to answer the question 'Comment vas-tu a l'ecole?' and have used language 'building blocks' to build sentences to say how we travel to school.  We always have fun along the way, with songs and games included!

This half-term has seen the closure of our topic on Ancient Greece. The children took part in a themed activity day. The class dressed up in Grecian style outfits and all looked fantastic. They were given the opportunity to try a variety of Greek food, although the olives weren’t enjoyed by all, however we had many brave tasters in class! Maple class also used the Greek alphabet to write their name and messages to one another. 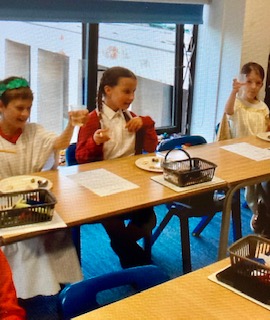 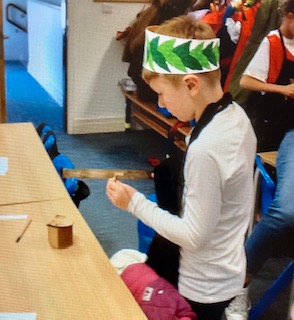 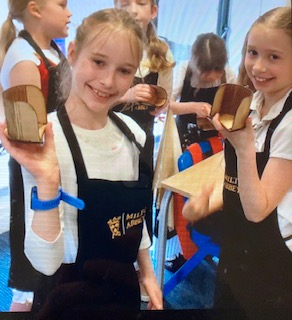 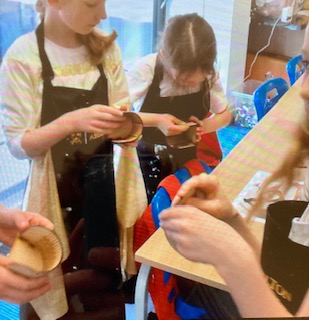 We finished the day by using a variety of hand tools, such as hacksaws, vices, metal files and glue guns to make a chariot, with the kind support of Mr Bolton from Milton Abbey school. Below are some examples of the fantastic chariots that were made in class. 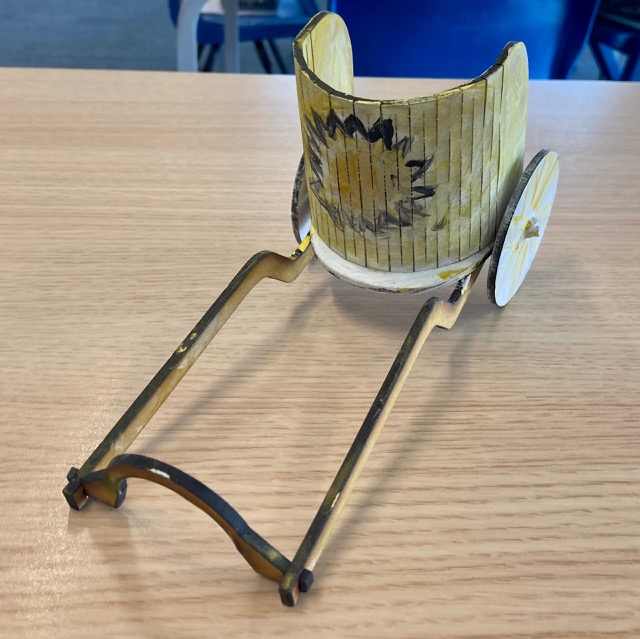 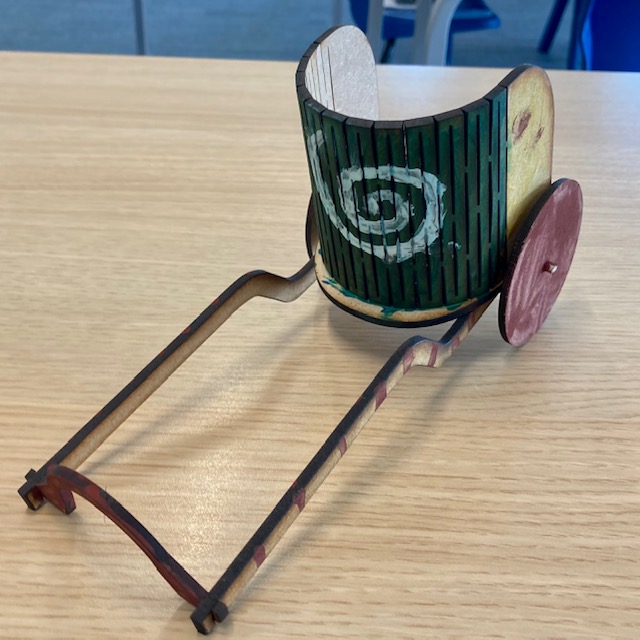 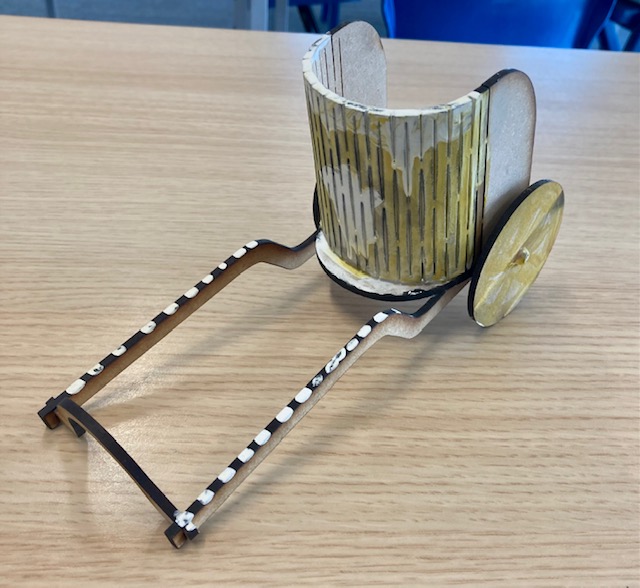 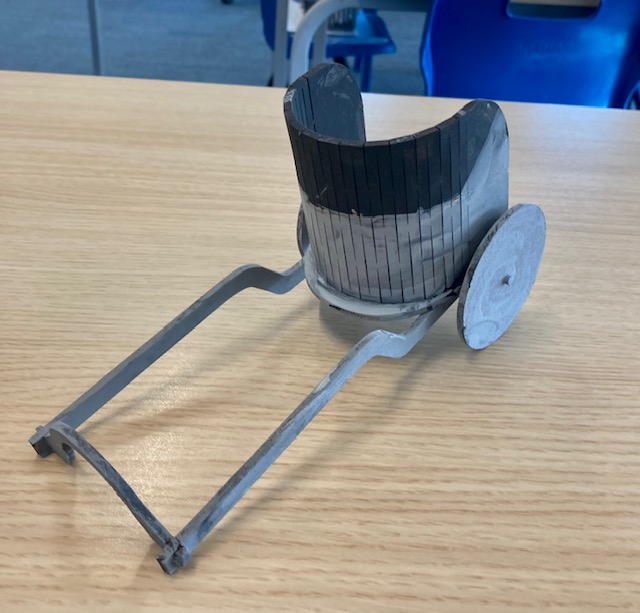 In Literacy, we have been learning about different forms of poetry and the use of figurative language in creating vivid images in the readers mind. The children planned and wrote some beautiful ‘Spring’ poems which we entered into the Purbeck Coast Poetry competition. Fingers crossed that we have a winner in Maple class, we are awaiting the results.

In Science this half term, we have been learning about sound. The children have now grasped a good understanding of how sound is made and heard. The children made string telephones and tested them out in the playground, they couldn’t believe how well they worked!

Maple class were fortunate enough to watch a demonstration from a couple of professional brass instrument musicians, who have helped to produce music for many exciting films and musicals. The children were given the opportunity to try out some of these instruments with an aim to encourage them to take up lessons.

I have been so pleased to see so many children taking part in the wider curriculum of the school. A few children in Maple have been learning the violin, ukulele and guitar which I have been lucky enough to hear, they really are progressing fantastically. I have also been delighted that so many children in Maple have taken up the opportunity to be part of a Netball, Acro, Multi-sports and Nature club this term. Keep up the good work, Maple!

In R.E. the children have reflected on the subject of 'sharing', with a focus on the Sikh faith.  We have aimed to make connections between what is written in the Guru Granth Sahib and how this is put into practice in everyday life.  It has been interesting hearing about 'Seva' or 'the selfless service to others' and how Sikhs in the Midlands helped people during lockdown.
Our French lessons have continued to include a mixture of the four skill areas - listening, speaking, reading and writing and we have focused on numbers this half term.  We have also learnt about some Easter traditions in France.

This half-term, Maple have been busy absorbing themselves into the world of ancient Greek gods and goddesses. They have learnt many stories about the Gods and are able to explain some of the bizarre relationships between them. The children were fascinated with the stories and as a result, had some fantastic opportunities for class discussions. The children wrote a wonderful story about Poseidon and Athena, which examples of can be seen below. 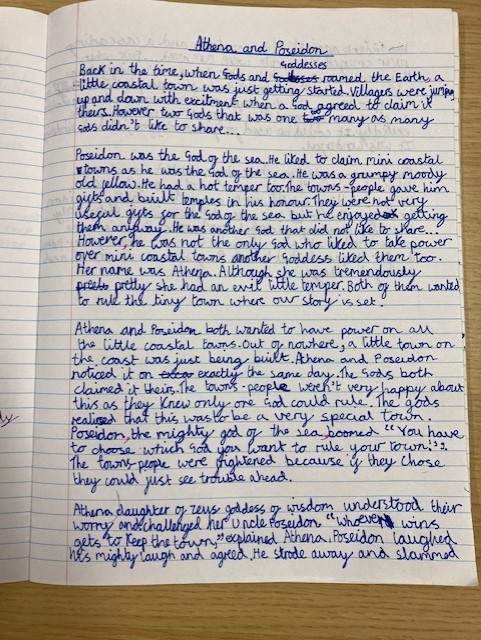 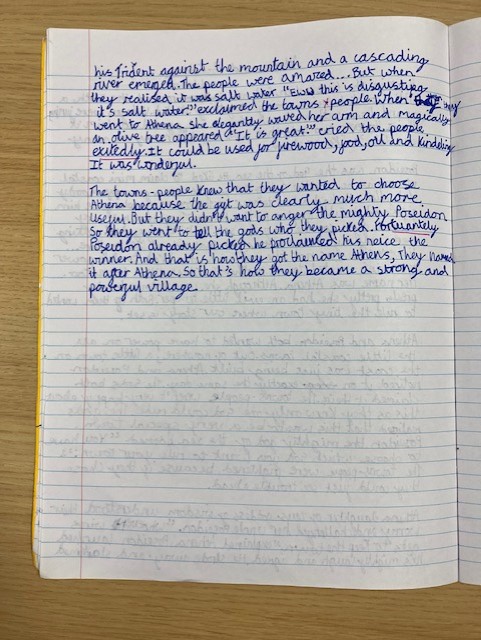 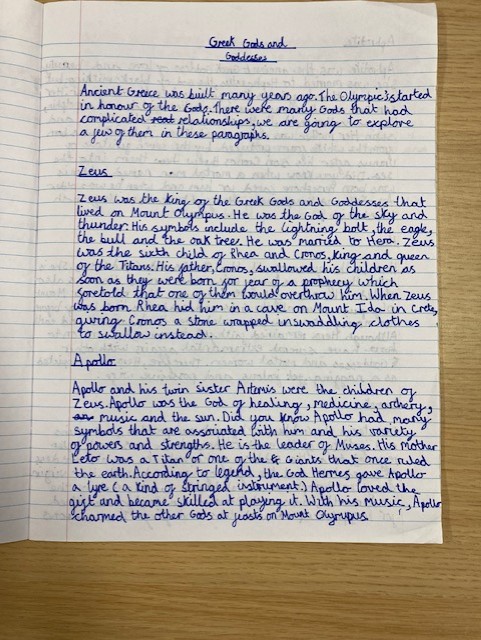 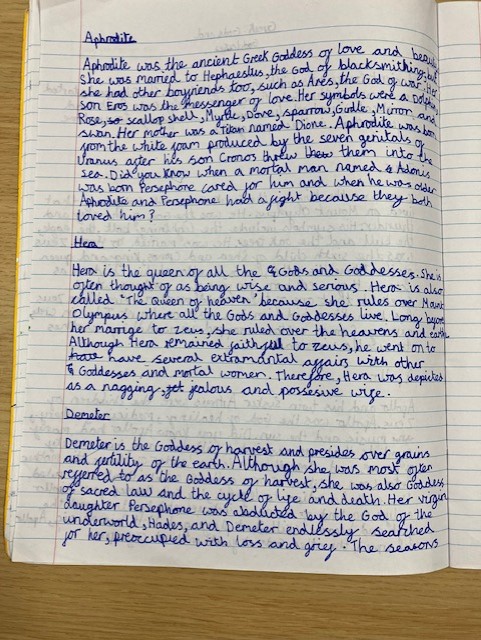 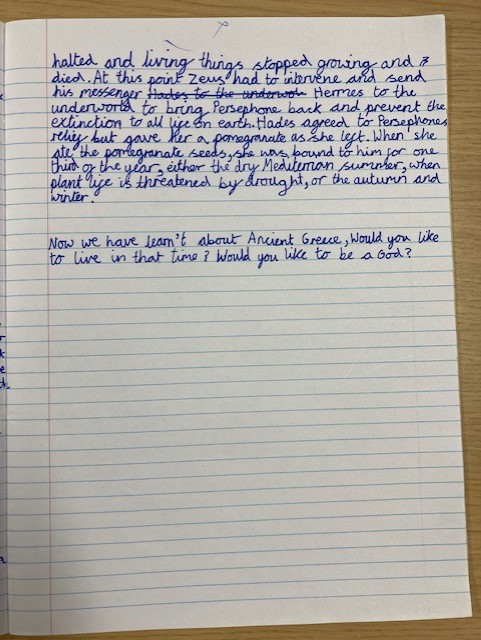 Art and DT lessons were linked to the Ancient Greeks and the children made some remarkable Greek vases and busts, using primary sources for inspiration. Next half term, we are planning a Greek day, including food and dressing up, we can’t wait! 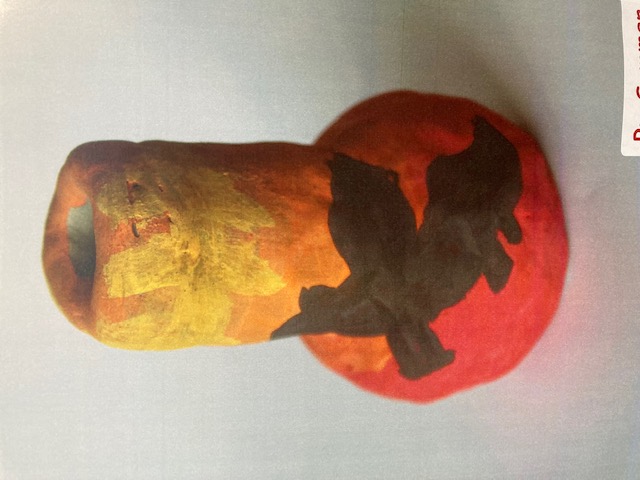 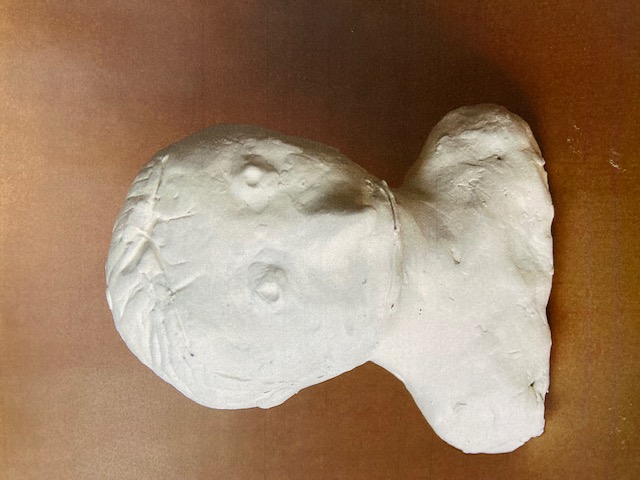 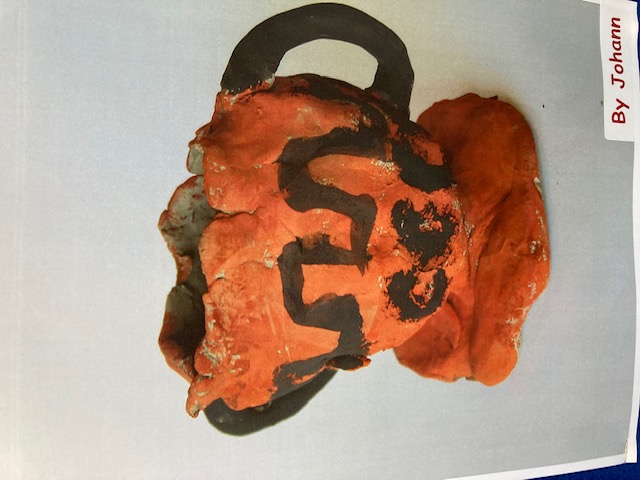 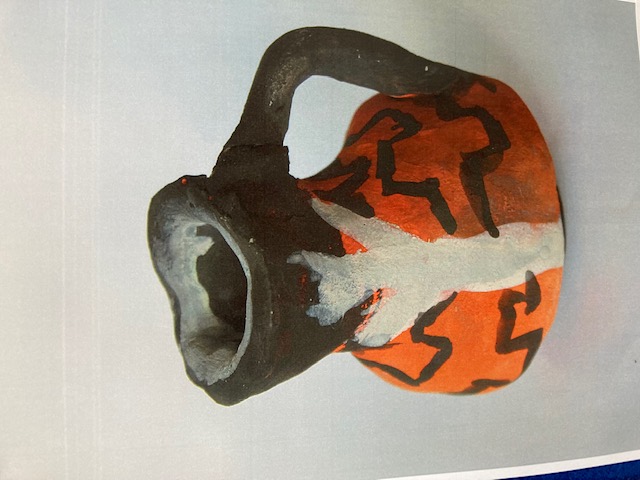 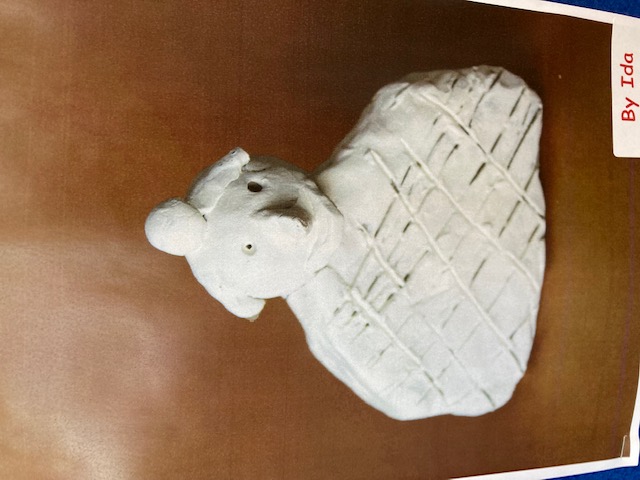 Maple class extended their learning in Science, where they made electrical circuits and discovered the differences between complete and incomplete circuits and even carried out an investigation on conductors and insulators.

Our key question this half term in R.E. has allowed us to explore the theme of 'belonging' and what this means to people who follow the Sikh Faith.  The children have enjoyed learning about this religion and how some Sikhs choose to become a 'Khalsa Sikh'.  During our discussions, we have reflected on our own sense of belonging and what this means to us.  The children continue to impress me with their mature comments and thoughtful reflections.

In French, we have been working hard on French phonics, which helps us with our pronunciation and making links between sounds and spellings.  We have combined this with learning about cultural aspects of France and have used 'The Carnival of the Animals',  by French composer Saint-Saens, as a stimulus.  We are also continuing to look at how sentences are put together correctly in French, using the story of 'Les 4 amis' to help us.  Bravo la classe!

During Children’s Mental Health week the children explored the theme ‘Growing together’. The children were so respectful during these discussions and their responses were so very thoughtful.